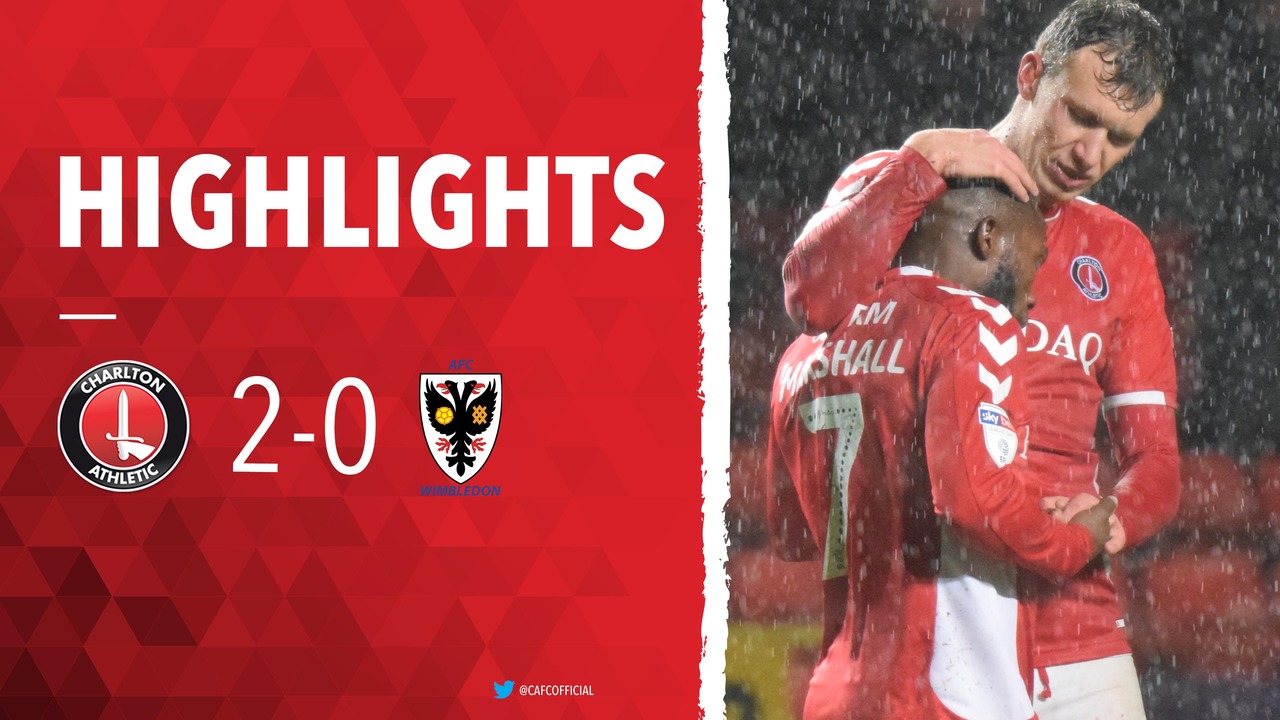 Ten-man Charlton battled to their second hard-fought victory in four days by beating AFC Wimbledon in terrible conditions at The Valley on Saturday afternoon.

A man light inside 60 seconds, following Naby Sarr’s straight red card, the match was poised at 10-aside at half-time after Mitchell Pinncok was also sent off for two bookable offences.

After the break, former Don Lyle Taylor broke the deadlock for the Addicks with a clever flicked finish and four minutes from time Mark Marshall doubled his team’s lead with a well-placed strike.

The result keeps the Addicks fifth in the Sky Bet League One table but they now sit level on points with fourth-placed Peterborough United.

In terms of team news, Lee Bowyer made three changes to the side that started Tuesday’s brilliant win at Portsmouth, with Tariqe Fosu, Nicky Ajose and Chris Solly coming back into the side.

They replaced Karlan Grant and George Lapslie, who missed out with a hamstring injury and concussion respectively while Anfernee Dijksteel dropped to the bench.

The game began in the worst possible fashion for Charlton, as they were reduced to 10 men after less than a minute. Wimbledon’s Tennai Watson beat Sarr to the ball on the right flank before being caught by a sliding tackle from the left-back.

The Dons players surrounded referee Trevor Kettle to demand a card and, with most inside The Valley expecting him to produce an early yellow, he pulled a red from his pocket.

The decision threw the Addicks’ early game-plan out of the window and, as well as having to go for an early bath, Sarr eclipsed former goalkeeper Nicky Weaver in becoming the Charlton player to receive the earliest red card in the club’s history.

Once the action restarted, Charlton enjoyed the majority of early possession. They came close to breaking the deadlock on 22 minutes when Fosu beat former Addick Scott Wagstaff on the left and sent in a low cross that Taylor swung at, only to see his shot blocked.

Two minutes before that chance, the Dons’ Pinnock had been booked for a late tackle on Ben Reeves and, with 33 minutes gone, that proved costly as he was pulled up for a clear dive on the edge of the Charlton box.

Referee Kettle had no hesitation in producing a second yellow card, making it 10-aside in SE7. Even before Pinnock’s red, the Addicks had enjoyed 73 per cent of possession at The Valley but they were unable to break the deadlock before the half-time whistle.

A clever short corner routine presented Charlton with their first chance of the second period on 47 minutes. Fosu rolled the ball into Taylor, who held off his man and laid off Reeves, who only could shoot over from 12 yards.

Reeves was involved in the Addicks’ next opportunity on 52 minutes. Dons stopper Joe McDonnell just about beat Taylor to the midfielder’s cross and Joe Aribo could only volley the loose ball wide of the target.

On the hour mark, the Addicks grabbed the lead. Aribo freed Ajose on the left and he whipped in a low cross that former Don Taylor flicked into the net.

Taylor did not celebrate his goal but his 13th strike of the season would prove vitally important.

The Addicks should have doubled their lead 15 minutes from time. A brilliant through ball from Ben Reeves put Ajose through on goal but he could not round goalkeeper McDonnell and the chance went away.

In the minutes that remained, the Dons tossed the ball into the Addicks box whenever they could – which was not too many times – and the hosts defended brilliant and would grab a second goal of their own before the full-time whistle was blown.

Fosu won possession on the half-way line and found Bielik who, in turn, spread the play to substitute Marshall on the right flank and he set himself before firing a low strike into the bottom corner.

It was a great moment for the wide-man – a popular member of the Charlton squad – and it made the result safe at The Valley, securing the Addicks’ sixth win in seven.